The archenaid is seen as the creation's crowning glory of all insects for a reason. Its extremely powerful fangs may simply be described as absolutely lethal. The physical presence of this enormous beast is beyond dispute. Rumours say that sundry wanderers have already fainted from only the frown of this terrifying creature. Although this tremendous animal seems to be slow because of its gigantic size, appearances are deceiving. These monsters are to be found in very deep direful caverns, sometimes along with other giant spiders. Any adventurer, no matter of his strength, is advised to keep away from this horrible beast, as either the violence or in the end the poison will bring him to his knees. 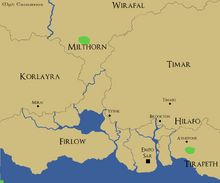 The archenaid are found deep inside spider caves. Spider caves containing Archenaids can be found in North Milthorn and in the Tirapeth/Aylestone region.

The archenaid is best faught in a group. The Archenaids attack with a deadly poison, able to kill even experienced fighters in seconds. If you are attacked by a lesser spider (such as a Pisaura) the poison gets canceled with the one from the pisaura. This means you should always have a Pisaura or lesser spider attacking the blocker at the same time.

Retrieved from "https://phobosworld.fandom.com/wiki/Archenaid?oldid=5878"
Community content is available under CC-BY-SA unless otherwise noted.